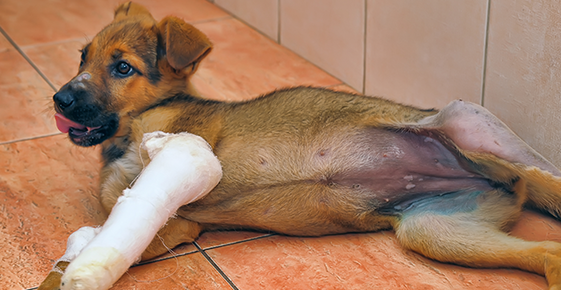 Puppies are happy and full of energy, running, wrestling, and playing so much that we often wish we had that much energy! But when that puppy is not happy, when it is lethargic and limping, then a visit to the veterinarian is in order. There are several orthopedic diseases that affect young dogs.

Osteochondrosis (OCD) is one of the more common juvenile orthopedic disorders. This is a problem that has an unknown cause but results in a disturbance of an area of cartilage and the underlying bone. This may cause limping, or it may progress to the point where the puppy is non weight bearing if the chip of cartilage and bone breaks off and starts floating around in the joint. Shoulders are the most commonly affected joint (75% of cases), but it can also affect the elbow, knee, or hock. This is a disease of large breed, older puppies. Males are twice as likely to be affected than females. Surgery is usually required.

Panosteitis is another common orthopedic disorder of puppies. This also has an unknown cause, but here the problem is edema inside of the long bones where the bone marrow lies. A hallmark of this disease is called shifting leg lameness, because different legs can be affected at different times. The puppy may be limping on the right front leg this month, then two months later be limping on the left rear leg. Older, large breed puppies are affected, but here males are four times more likely to be affected than females. Treatment is pain control and anti-inflammatory medications. The good news is there are no long term adverse effects of this disease, and eventually the disease just disappears.

Legg-Perthes disease is another orthopedic disease of older puppies, but this time small breeds are more likely to be affected, and females and males are equally affected. For an unknown reason, there is a disruption of blood flow to the head of the femur (thigh bone) which causes the death of some bone cells. When x-rays are taken, this bone in the hip looks like it is dissolving. These bony changes cause pain, and the treatment is a very successful surgery called a femoral head ostectomy (FHO). This removes the whole femoral head and the dog creates a false hip joint.

Elbow dysplasia is becoming more common. This is a syndrome of large breed, older puppies. There are actually a number of problems that can occur in the elbow, and any one or a combination can lead to the arthritis that we call elbow dysplasia. OCD as we discussed before can occur in the elbow. Ununited anconeal process (UAP) and fragmented medial coronoid process (FCP) are other developmental problems. All these disorders require surgery or a debilitating arthritis is likely to occur.

Hypertrophic osteodystrophy (HOD) is a very rare disease of large breed puppies, usually two to eight months of age. The puppy will be lethargic, painful, and may have a fever. The ends of the affected long bones will have a characteristic pattern on an x-ray. These puppies may recover fully, may recover but with some deformities, or may die from the disease.

There are a number of other, less frequently seen, diseases that can cause limping in puppies: Lyme disease, Anaplasmosis, meningitis, and immune- mediated polyarthritis. But undoubtedly, the most common cause of lameness in puppies is, of course, trauma, as puppies can be wild and crazy!